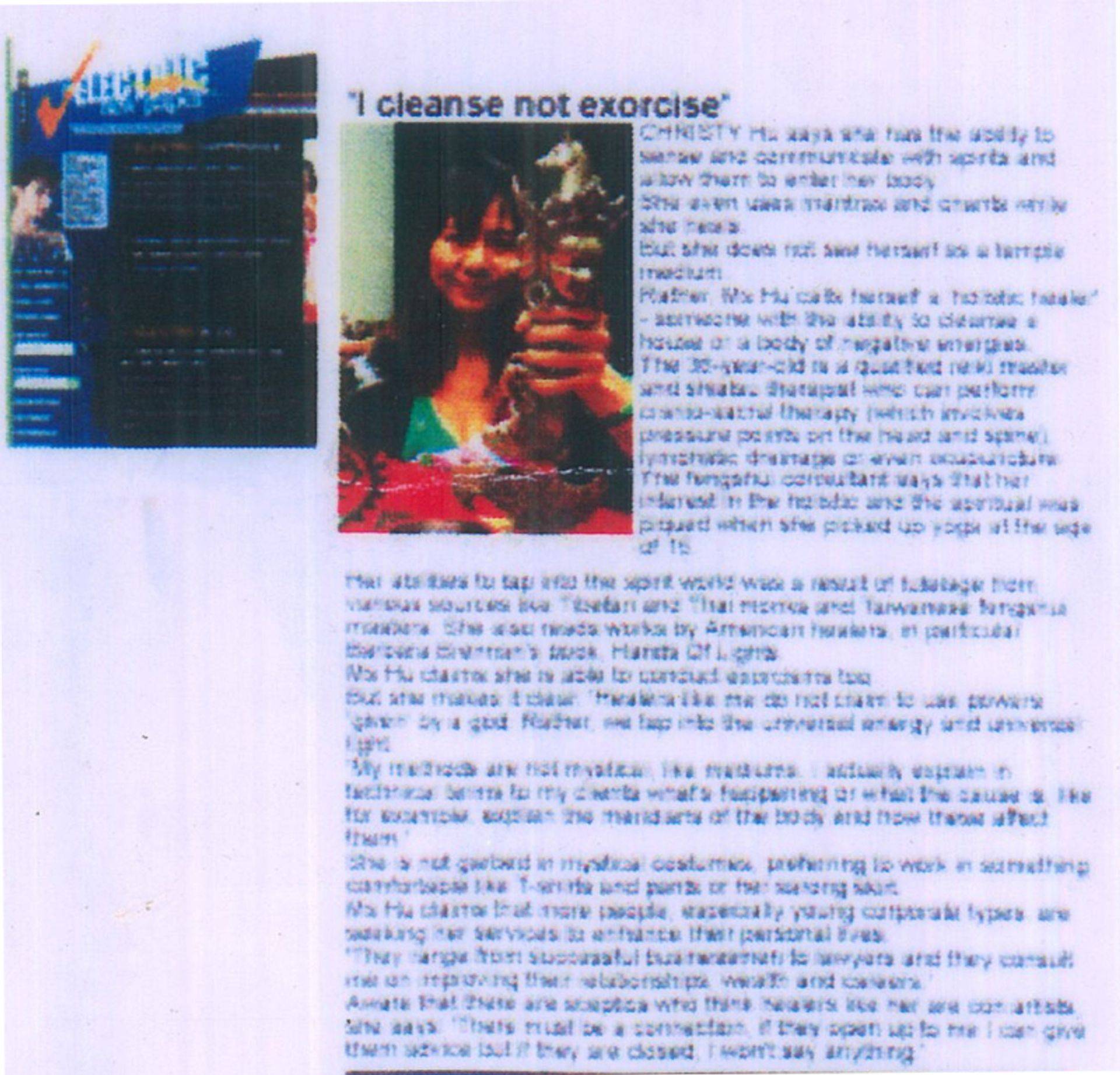 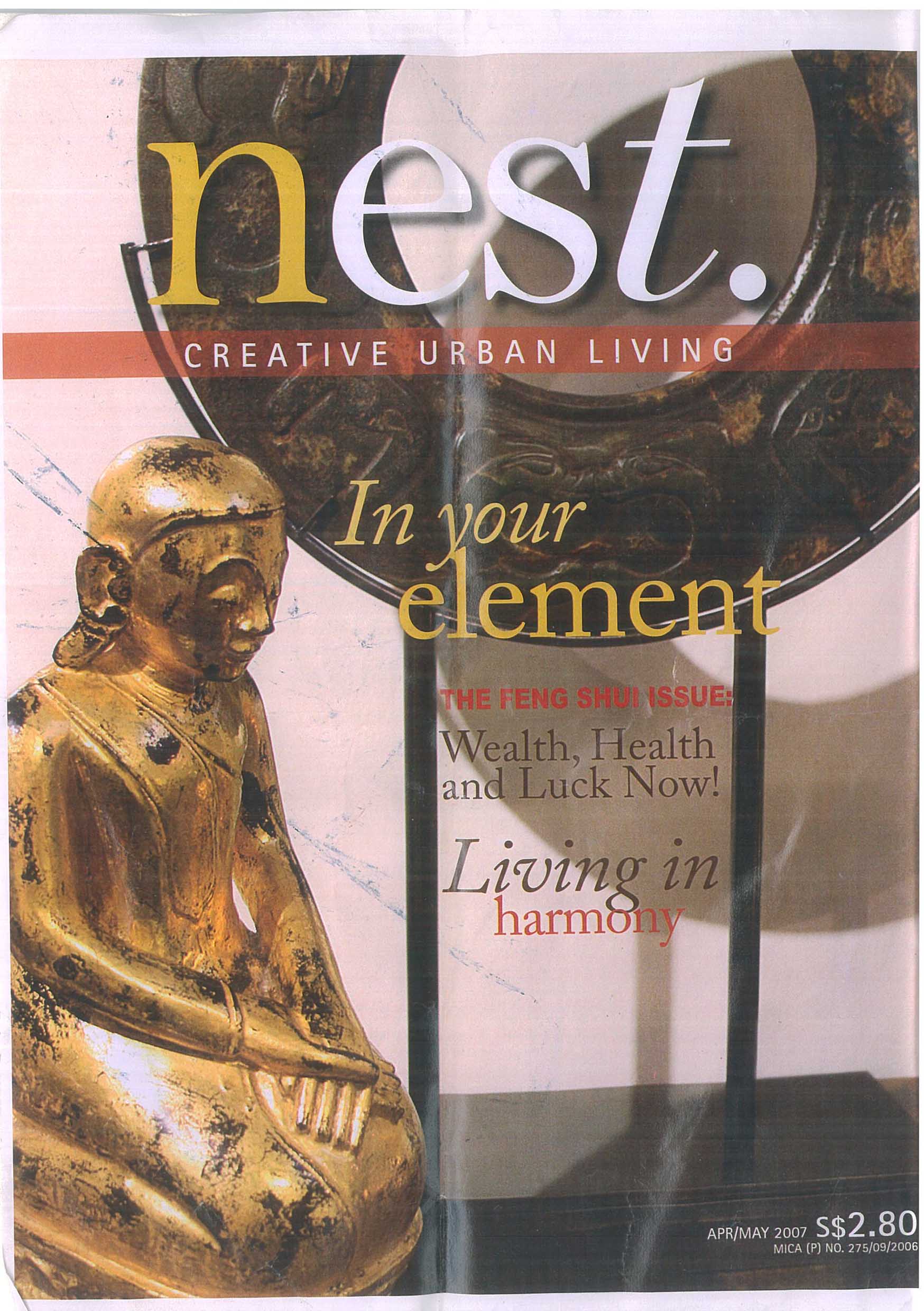 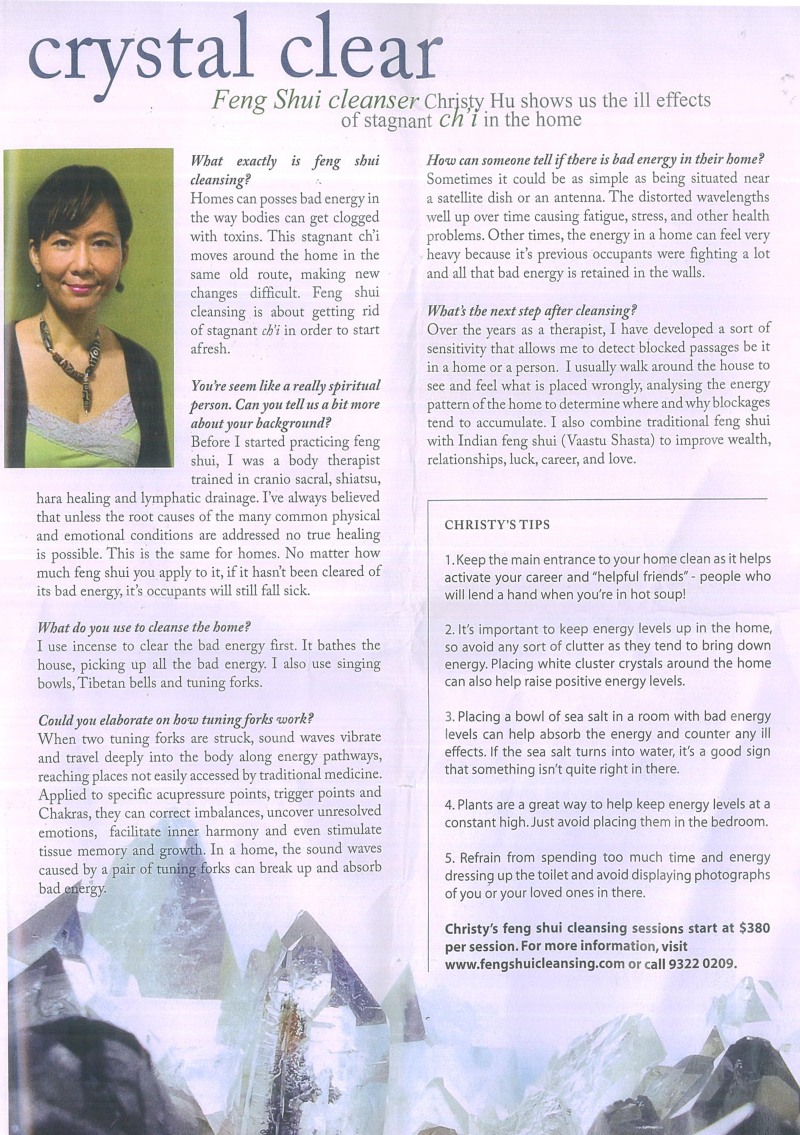 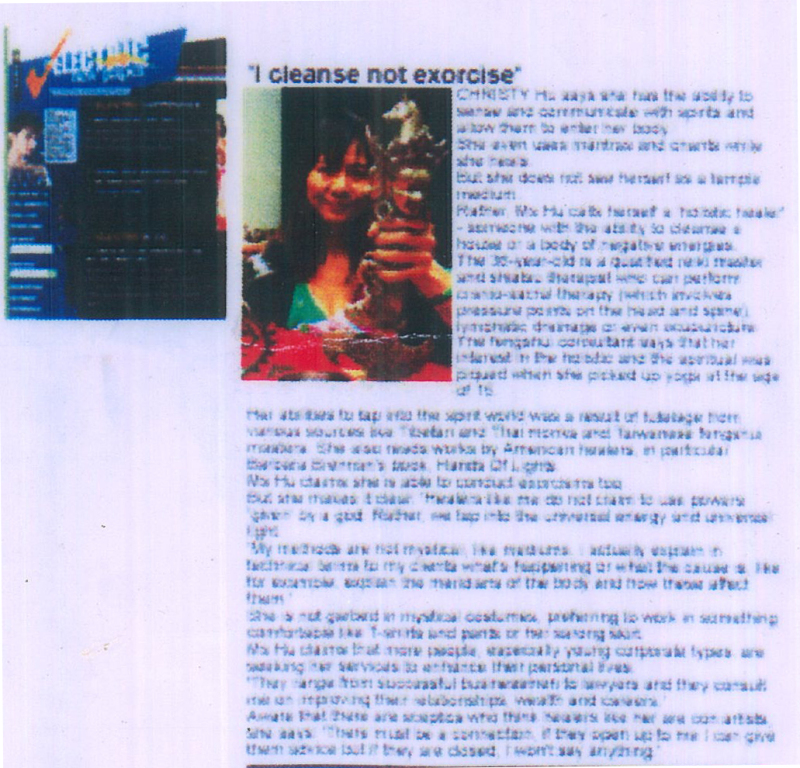 New Paper - 1st October 2005
"...holistic healer' - someone with the ability to cleanse a house or a body of negative energies
...more people, especially young corporate, are seeking her services to enhance their personal lives"

Her World - October 2005, Singapore
"At the end of each session Christy will do a chakra balancing. The chakra balancing leaves one feeling centered and at peace with the world". 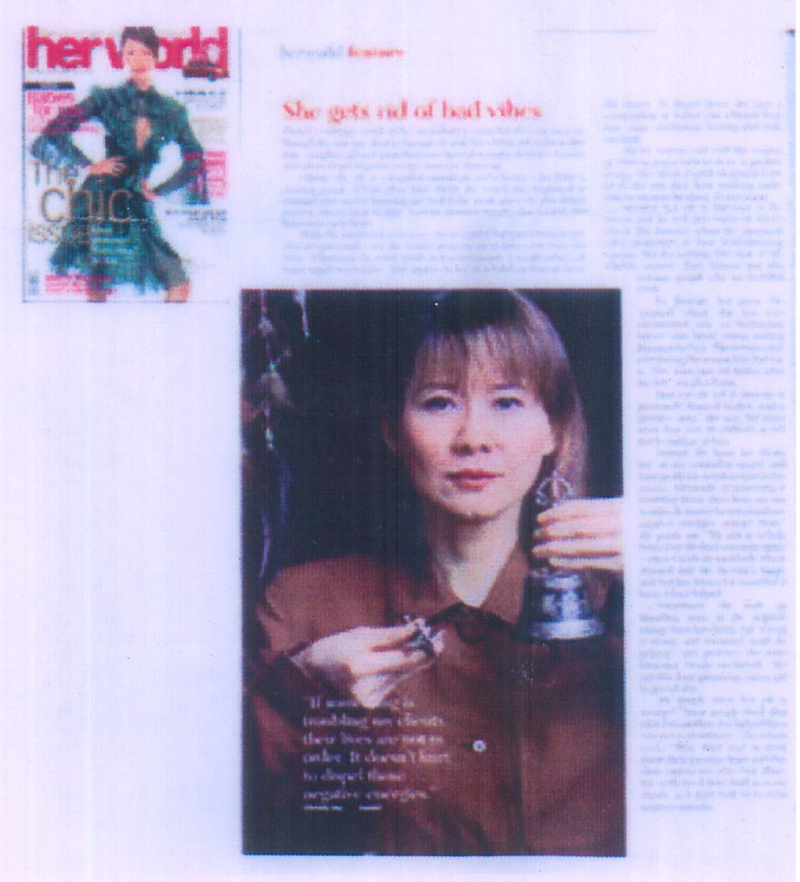 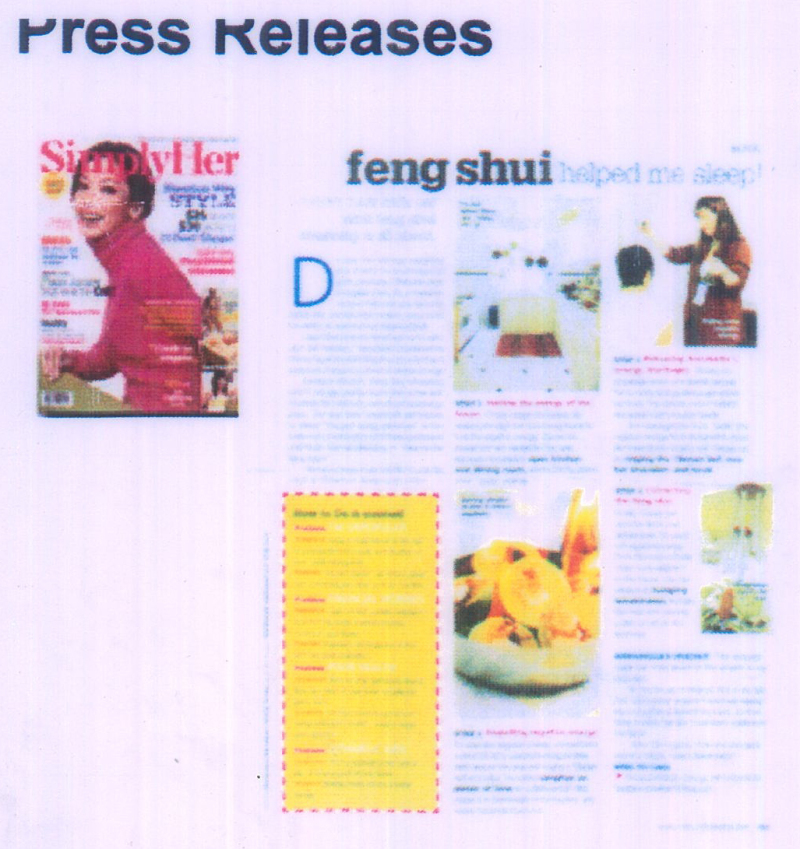 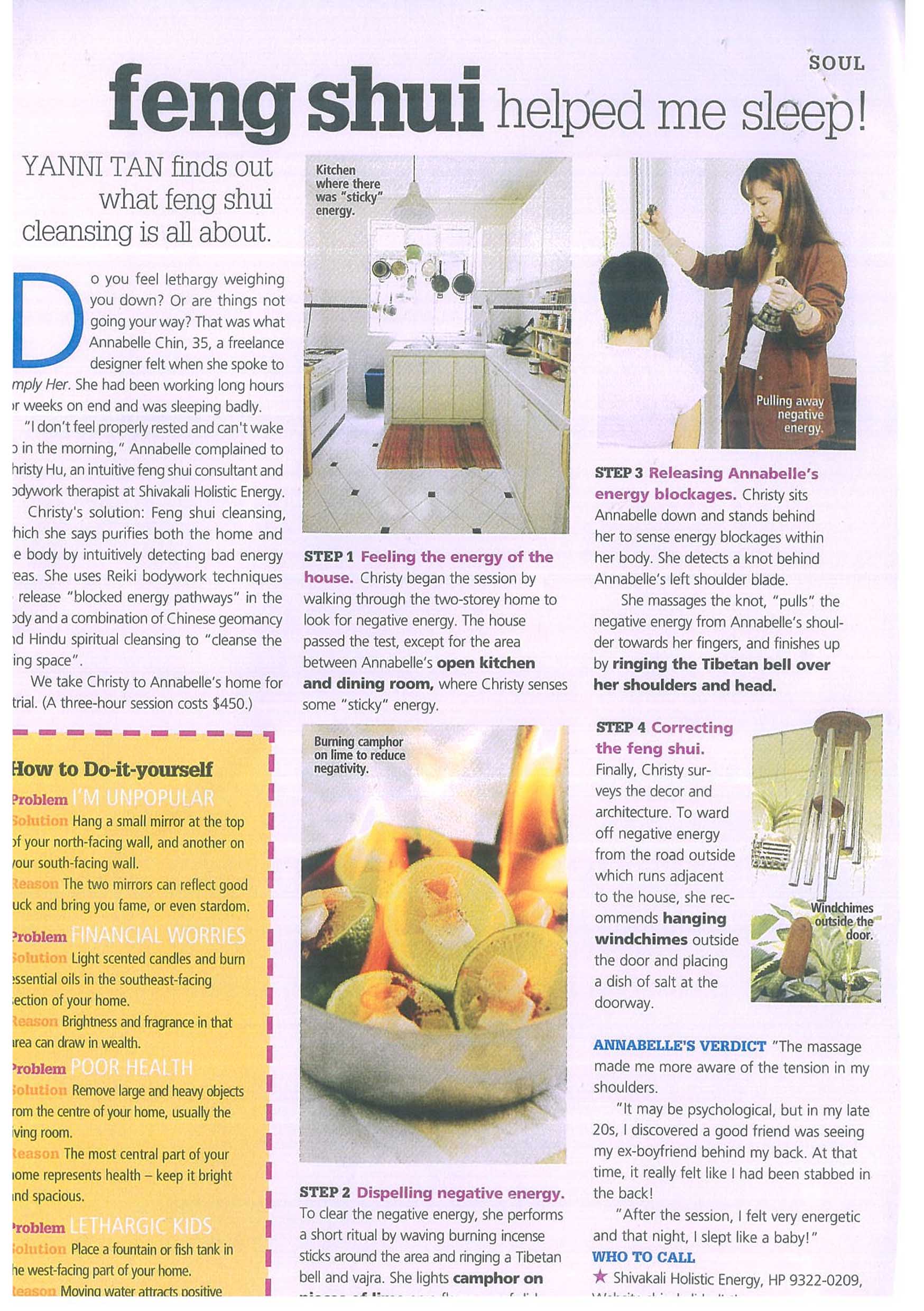 Fengshui helped me sleep!
Yanni Tan finds out what feng shui cleansing is all about.

Rumour has it that feng shui played a significant role in the construction of NUS and its shift to the Kent Ridge campus in the 1980s.

Feng shui, which translates literally to wind-water, is the ancient Chinese art of placement with its theory based on Chinese natural philosophy and cosmology. The goal of feng shui, also known as geomancy, is to achieve harmony, comfort and balance.

From the perspective of feng shui, NUS sits on one of the most auspicious piece of land in Singapore. This is according to Master Tan Khoon Yong, vice-chairman of the International Feng Shui Association.

Tan is a renowned geomancer who has appeared on several Chinese New Year television specials to discuss the coming year?s fortunes for the different Chinese zodiac signs. His assignments during his career, which spans over 20 years, include the shifting of the Merlion statue in 2002 and the extension of shopping mall Sogo Paragon.

Tan?s geomancy services were also rendered during the construction of the Kent Ridge Guild House on campus.

In his book The Secrets of the Five Dragons: Feng Shui and Singapore?s Success, Tan wrote that NUS rests atop Kent Ridge hill, the biggest of three reclining tiger hills in Singapore. With the formation of a reclining tiger still in slumber, NUS will gain international recognition.

Tan?s prediction seems to have come true with NUS being placed amongst the world?s top 20 universities and top three global universities in Asia in recent rankings conducted by publications Times Higher Education Supplement and Newsweek respectively.

In an interview conducted in Mandarin, Tan gave his insights on the relationship between feng shui and NUS.

Tan told The Observer the late Venerable Hong Choon had told him, in a casual conversation, that the government had consulted the abbot on the shifting of NUS from its original campus along Bukit Timah Road to Kent Ridge.

Apart from being head monk at the Kong Meng San Phor Kark See Monastery, the largest Buddhist temple in Singapore, from 1947 to 1990, Hong was a highly respected and prominent feng shui advisor. Tan was an acquaintance of Hong?s.

According to Tan, Hong had chosen Kent Ridge as the location of the campus because a tiger land was more suitable for studies. Furthermore, as a silent and female tiger, the land would also make students ?more docile.?

The plot of land that the main NUS campus sits on remains the same but developments to it are constant. The University Cultural Centre and the Yong Siew Toh Conservatory of Music are two of the latest additions to the NUS landscape.

How well do such developments fit into the original feng shui of NUS?

In with the new and?out with feng shui?

Commenting on the new and modern-looking buildings on campus, Tan suggested that the large buildings be placed far away from the main road.

?They appear to be choking the tiger?s mouth,? said Tan, alluding to Entrance A on Clementi Road, which leads to the UCC. ?They are not elegant and appear too dense and heavy. They appear too strong and oppressive.?

?These structures should be made to look grand but soft at the same time,? he added.

After touring the building with The Observer, Hu also said she felt that the corridor leading from the main entrance into the building would give students a lot of stress.

?The walkway is very straight and it?s too long,? she said. ?It feels claustrophobic and does not give a happy feeling.?

?You feel like the walls are closing down on you,? she added.

Hu predicts that the stressful ambience will last for the next three years before people grow to be comfortable in the building.

She suggested that more plants could be added to ?break the straightness of the walkway.?

However, Hu agreed with Tan on the school?s generally favourable feng shui.

?The roads surrounding the campus are very auspicious and protective,? she said, referring to Clementi Road and Ayer Rajah Expressway that run along campus boundaries. ?They are like two arms embracing the school.?

Hu described the formation with the metaphor of a mother?s arms embracing and protecting her child, and added that these ?arms? kept the ?qi? (energy) within campus grounds.

?Students will feel comfortable in NUS and they are unlikely to change school once they are in,? she said.

On top of suggestions for the new buildings, Tan also advised on bold use of colours and addition of water fixtures, as these elements would benefit a tiger land and help make students more proactive and enthusiastic.

He explained that the apparent lack in these two elements may have caused ?NUS students to be passive compared to students from other universities?.

?In general, anything sharp is unsuitable as it might agitate the tiger,? he added.

Some might be surprised to hear that an institute such as NUS, which emphasizes on research, might let something as abstract as feng shui dictate its design. Raymond Chua, senior manager of the Campus Development Division, is one of them.

Chua has been part of the Office of Estates and Development since 1980 and witnessed the shift of NUS from Bukit Timah to Kent Ridge. He said feng shui has not been used in the design and construction of campus buildings in the 1980s nor in present times.

According to Chua, issues like budgetary constraints, aesthetics and land optimization were top priorities for the university when it came to the construction of buildings.

?In the early days, NUS was built like a factory,? he said. ?Everything looked almost the same.?

Abstract as geomancy may seem, there seem to be some believability and logic behind this ancient art that has often been written off as mere superstition.

According to the IFSA, feng shui is classified under the study of Physiognomy, a form of Chinese Metaphysics that involve the observation of appearances through formula and calculations.

Defending the ancient art, Tan said that some people have become suspicious of feng shui and branded it as a superstition because there are ?too many conmen out there? who misuse the teachings of feng shui to swindle and deceive.
To Tan, feng shui becomes a superstition when people hope to depend on it and ?don?t want to do anything with their lives.?

To this, Tan added that feng shui is not a miracle pill that has instant magical powers.

?If you are sick, you should see a doctor. If you have an exam, you need to study,? he said.

on  Channel 5 January 2006 on space clearing